When you have completed this session, you should be able to

Analogue and digital video technology is based on television broadcasting. Therefore it is good to know some of the basic principles of television.

TV picture is made from a series of still pictures. The pictures are transmitted to the receivers when divided into lines. These lines are displayed by electron rays onto the phosphorous coating of the tube surface. In order to achieve a picture free of b link ing, and for increasing the frequency of the screen interlaced scanning is used. Electron rays first display the odd lines then returns to the top of the screen and the even lines are displayed between the odd ones.

This method is known as interlaced scanning.

There are three color TV standards are used in the world. The most important specifications are the followings: 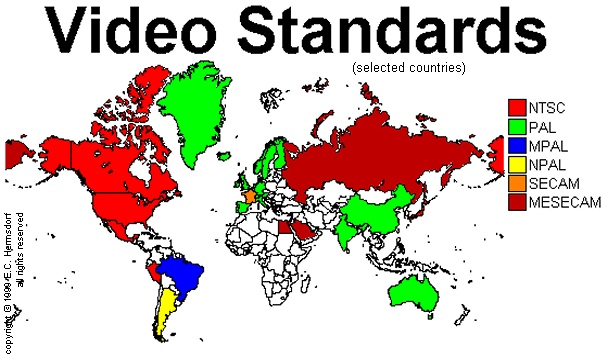 The oldest norm used in the United States and Japan.

It was created by modifying NTSC norm in order to eliminate the sensitivity of the successor for transmission phase torsion.

Norm introduced in France. The effect of phase torsion is decreased when switching from line to line only one color difference signal is transmitted.

In other parameters it is the same as PAL norm.